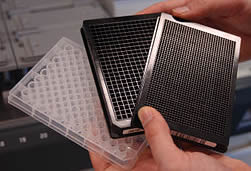 Liquid ammonia is the best-known and most widely studied non-aqueous ionizing solvent. Its most conspicuous property is its ability to dissolve alkali metals to form highly colored, electrically conducting solutions containing solvated electrons. Liquid ammonia can also be used to dissolve other electropositive metals including Calcium, Strontium and Barium, as well as many others. At low concentration, usually less than 0.06mol/L, deep blue solutions form containing metal cations and solvated electrons. These solutions are very useful as strong reducing agents. Ammonia is directly or indirectly the precursor to most nitrogen-containing compounds. Virtually all synthetic nitrogen compounds are derived from ammonia. An important derivative is nitric acid. Ammonia can also act as a ligand in transition metal complexes. It is a pure σ-donor, in the middle of the spectrochemical series, and shows intermediate hard-soft behavior.

Gaseous ammonia also plays a role in the laboratory. It is estimated that as many as 80 million mice and rats are tested annually in the Unites States alone. With each one of these mice and rats contributing to and being affected by ammonia- the byproduct of feces/urine decomposition, it is easy to see why an ammonia monitoring and ventilation system is a necessity for any animal testing facility. To date, there has been a lag in the adoption of ammonia monitoring systems for animal testing facilities mainly due to the economic realities of how expensive these systems can be. This however is no longer the case with the introduction of Pacific Sentry’s ammonia sensing technology and the Small Animal Ammonia Sensor.

The need for ammonia detection

Whether you are conducting bioassays on a new formulation of a synthetic nitrogen-containing compound or monitoring the environment of your mice/rat cages, the need for ammonia detection and monitoring should be apparent. Every test, bioassay, experiment, and study that is conducted uses resources in the form of time, labor, and materials. To make the most efficient use of these resources, the researcher needs to ensure the test or study they are performing is as controlled as possible, including monitoring/controlling ammonia concentrations (either in liquid or gaseous forms depending on the study).

For example, if an animal test facility has 10,000 mice cages and a quarter of those cages have ammonia levels that regularly, but unknowingly, exceed 25+ ppm, then cross comparing test subjects from the “higher-ammonia-level” cages to the “lower-ammonia-level” cages would be misleading and skewed. This could potentially render a whole project as inconclusive because ammonia levels were not monitored or accounted for. Ammonia affects animals’ health and makes them more susceptible to disease.

The high-sensitivity capabilities of Pacific Sentry’s technology also allow their sensors to be used as confirmatory indicators of biological growth, a valuable tool for many researchers.

We offer customized solutions for bioassay applications including well-plates, petri dishes and test tubes incorporated with our ammonia sensing technology. We can also provide sheets of sensor material to be implemented as the researcher sees fit. There is no limit to the possibilities of ammonia detection incorporation; whatever the need is, Pacific Sentry can work with you to offer the best possible solution for your specific application.

The Small Animal Ammonia Sensor offers a simple, visual indication of the ammonia level present in mice/rat cages. Whether you operate as a large-scale animal testing facility, university lab, or private researcher, this sensor will give you the ability to monitor ammonia levels in your mice/rat cages on a continuous basis. Simply attach the sensor in a convenient location (the water feeder for example) and observe for color change. No longer rely on infrequent sampling with passive dosimeter tubes, gas detection tubes, or electronic ammonia meters. The Small Animal Ammonia Sensor will provide the information you need to easily determine if your animal testing operation is functioning optimally, cages are being cleaned often enough, and ammonia levels are being maintained to a minimum. The sensor also offers the ability to monitor and track trends in ammonia concentrations for each individual cage.

If you would like to know more about what we do, or have other general inquiries, please call (425)-229-9701 and talk directly to a representative. Custom fabrication requests are also welcomed; call or email info@pacificsentry.com for details. We will gladly work with you to design the best solution that meets your needs.